All members are invited to a UCU University of Leeds local association emergency general meeting on Wednesday 6 July at 1pm, in Clothworkers North Building lecture theatre 2.31 (cinema). The agenda is:

2. IT restructure
An update from the negotiating team

3. UCU president
The committee has voted to appoint Tim Goodall as president for 2016-17 under rule 8.9 because the Annual General Meeting didn’t elect a president. The committee is seeking the general meeting’s approval of that decision.

After the two national strike days on 23rd/24th May, UCU at each university were asked to choose one further day for a local strike, and most have gone for Open Days. This means that prospective students and their parents are hearing about the campaign for fair pay in Higher Education quite a lot!

Our strike at Leeds went very well. There were pickets around the university as staff arrived for work, and then a large and friendly presence throughout the morning greeting Open Day visitors and handing out ‘Please support our strike‘ leaflets (and giving directions..) Parents and prospective students were mostly very supportive. We ran the ‘guess the gender pay gap’ game again, and visitors were genuinely shocked that it’s so high at Leeds (£7,995 gap between the average pay of male and female academics, from HESA statistics).  The statistic of 52% of academic staff here on insecure contracts also surprised visitors.

The signage around the University mysteriously changed overnight, see the photo gallery below (click on any photo to see it larger) and this generated quite a buzz on social media! Leeds featured heavily in the Storify on the UCU ‘summer of protest‘. The campaign for Fair Pay in Higher Education will continue until universities’ managements offer a reasonable deal for our members on the three key pay-related areas: a fair pay rise, action on gender equality, and action on casualisation.

Follow Leeds UCU on Twitter (@leedsucu) for up to date news, and members please check that emails from Leeds UCU aren’t disappearing into your Clutter folder! 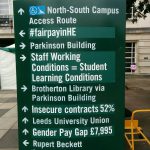 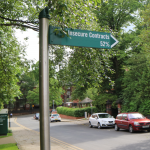 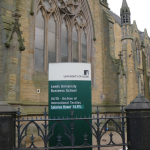 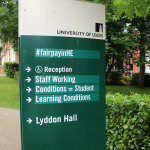 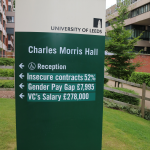 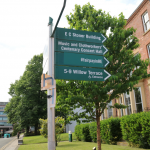 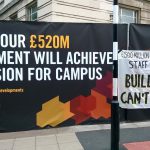 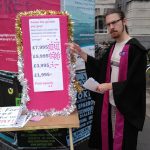 Mark Taylor-Batty spoke tonight to Gayle Lofthouse about pay, the gender pay gap and casualisation in HE on BBC Radio Leeds. Use the BBC Listen again function to catch his interview here (scroll to the 2:17 point): 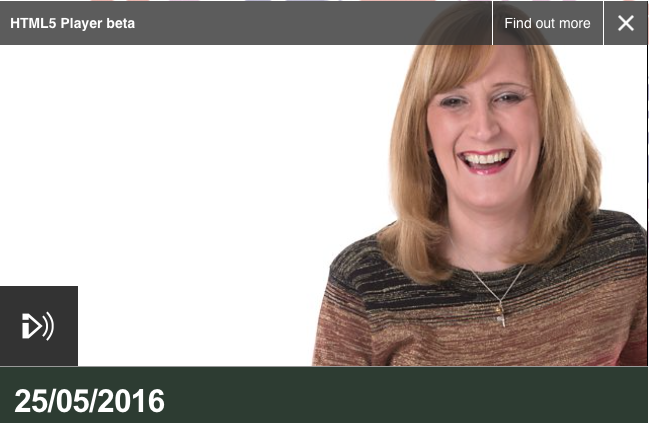 Are you on a casualised contract? Do you know someone who is?

These include fixed term, hourly paid, zero hours, agency contracts… If you do not have a permanent, salaried post, then you are on a casualised contract. We know that casualised staff may have particular questions about taking part in industrial action.

Did you know that casualisation issues are a key part of the current dispute?

Casualisation forms a key part of the joint unions pay and equality claim for 2016-17. We want nationally-agreed action for institutions to reduce the proportion of their staff on casual and zero-hour contracts and to ensure that their pay reflects the rate-for-the-job of permanent staff – you can read more here: https://www.ucu.org.uk/he2016

Do you want to find out more about the upcoming industrial action and campaigning?

We’re having a meeting! Members and non-members all welcome, please bring your colleagues along to discuss:
– How do I strike?
– Why should I strike?
– The Leeds UCU Strike Hardship Fund: what it is and how to apply
– What about the “work to contract” action short of a strike (begins 25 May)?
– Campaigning at Leeds: what’s happening, when, sharing ideas
– What are we doing at Leeds to fight for secure and fair contracts and how are we including it in our campaigns?

Please come to our UCU meeting for staff on casualised contracts on Monday at 4pm in Baines 1.13, and pass this message on to anyone (member or non-member) who is on a casualised contract. We will have tea, cake, and lots of solidarity and support!

Also, check out our local campaign materials, including a poster dedicated to casualised members: https://www.leedsucu.org.uk/wp-content/uploads/2016/05/casual.pdf

As the cuts bite across the public sector, it’s never been more important to build our union. You can help us grow today by emailing your colleagues and asking them to join. Staff in our colleges and universities have never needed their union more. We are a growing union, a campaigning union and a successful union. Every year, around 7,000 members seek help for a problem at work from their local UCU branch. We manage to resolve most of these issues but where we cannot the union’s legal service is there to gain redress. In the past 12 months that redress has amounted to more than £2m in settlements for members treated unfairly at work. We are campaigning hard to defend pensions, jobs and to hold back the privatisation of our education system. The more members we have, the stronger and more successful UCU will be.

Circulate this flyer: http://www.ucu.org.uk/media/pdf/h/s/Recruitment_leaflet.pdf and encourage them to join online using this link: https://join.ucu.org.uk/

Please download, print and display these posters on your office doors and other areas visible to students. 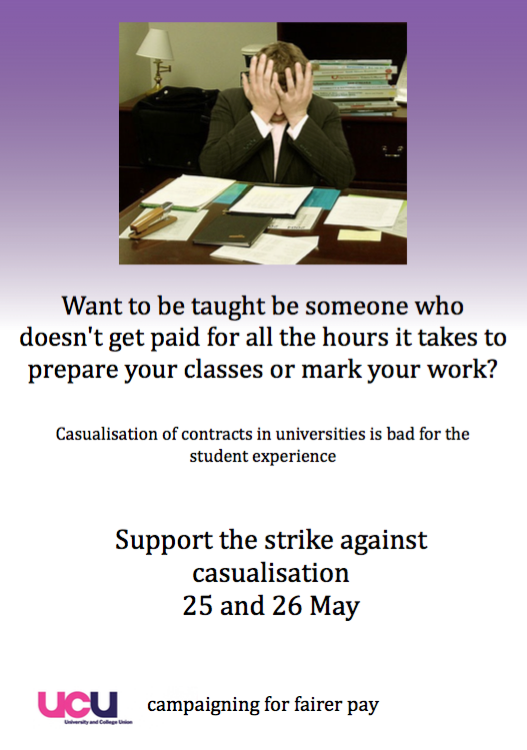 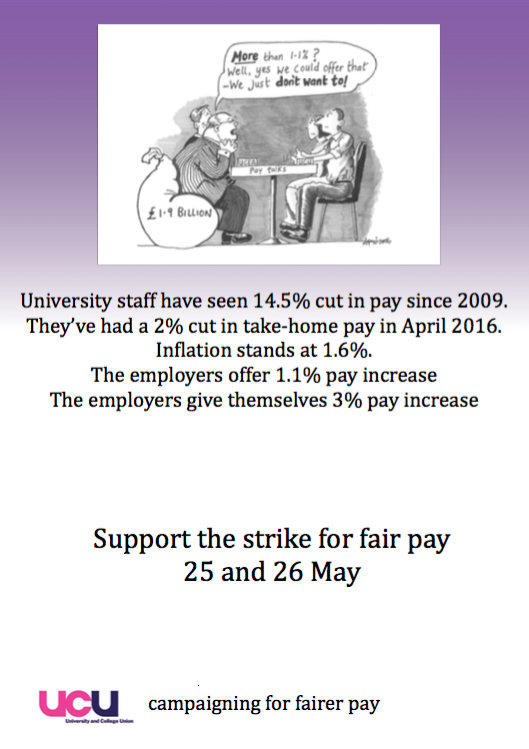 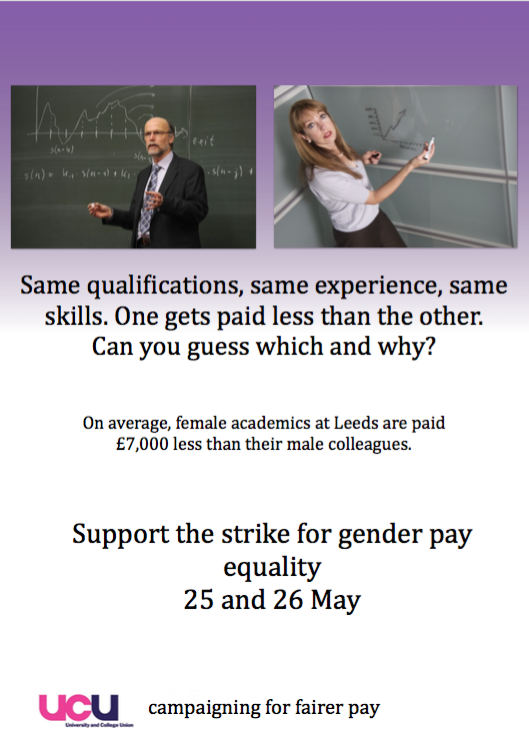 I am writing this open email to you on behalf of UCU members at the University of Leeds. As you know, in the meeting of New Joint Negotiating Committee for Higher Education Staff last week, the university employers made a full and final offer of a 1.1% pay rise for 2016, fractionally improving upon the 1% opening offer. I hope you will recognise the shock and disappointment felt by staff to what comes across as a derisory and deliberately provocative stance.

Last year, when the employers insisted upon a 1% final offer for 2015, the university’s remuneration committee was in a position to decide whether senior members of the university executive group should receive any more than the 1% that it was argued was all that was affordable for the rest of us. Despite the university’s claim to transparency, and despite this group of senior staff being within the UCU constituency, we have not to date been told whether or not that small group received anything more than our 1%. I’d like to ask you now to make the figure public.

At the end of April, staff in former National Insurance opt-out pension schemes received a cut to their take home pay, in the form of increased NI contributions and, within USS, increased pension contributions. For UCU members in USS, this together was pushing a 2% cut to take-home pay, with the biggest losses seen by the youngest staff in the post-2011 career average USS scheme. For the purposes of illustration, I append a screen-grab of my own net salary from recent months, which I use to represent my members. You’ll see I took a cut to take-

home pay of around £34 a month, or £410 a year. When we asked members to share their loss using the hashtag #aprilpaycut we saw that the average loss declared was between £400 and £600. To put that in perspective for you, that’s a Christmas budget, or a month’s rent or mortgage for many families. This actual cut to take-home pay is on top of the 14.5% average cut to the value of my colleagues’ pay against inflation over recent years.

In light of this, you must know that if you seek now, alongside other university leaders, to argue for nothing more than a 1.1% pay increase for 2016, you will be arguing that we should end negotiations with staff actually worse off in take-home pay than when we began those negotiations. Would you join me in supporting your colleagues around the university and recognise that this 1.1% final offer represents neither a dignified nor professional attitude to negotiation on UCEA’s part? Can you assure staff that neither you nor the UEG approved the 1.1% final offer in sending your representation to UCEA? It certainly falls short of the pay increases factored into IPE projections as affordable, and is a long way short even of the national average pay settlement.

As the union and the employers now find ourselves in a dispute over this matter, might I request that the University Executive Group, who might well have received a significant pay increase over the rest of us, now respect the dignity of those who wish to see a pay increase that recognises and rewards their long hours, hard work and intrinsic value to the institution, and who wish to see women paid the same as men for the same work, and acknowledge that (demonstrated by an unambiguous ballot outcome) the actions colleagues are prepared to take to support those ambitions are honourable in intent?

Our team will be happy to hear from you at Monday’s Joint Committee of the University and the UCU, and I can subsequently communicate your responses to my colleagues in the union across campus.

President, UCU at University of Leeds

We recently informed you about the reduction to your pay that will occur at the end of this month: https://www.leedsucu.org.uk/archives/1973

Send us a photograph of the back of a payslip with your loss written on it to ucu@leeds.ac.uk, and we will collate them anonymously. Alternatively, tweet your loss compared to March to @leedsucu with the hashtag #aprilpaycut 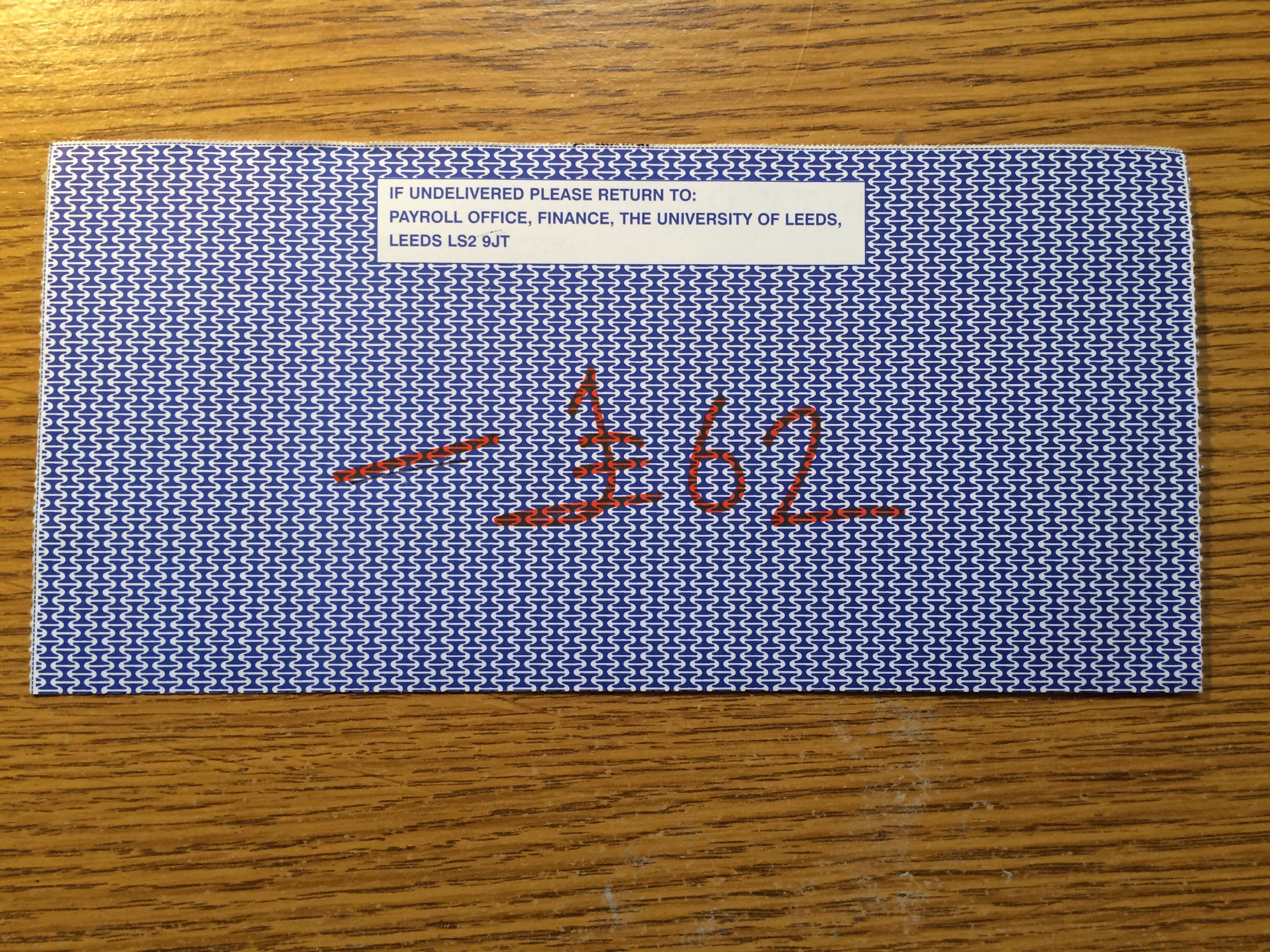