Update, January 2015: We have compiled a chart that compares the three proposed adjustments to the USS scheme that have been tabled in recent months; 1. The UUK formal proposal, 2. The UCU counter proposal, 3. The compromise proposal that is currently being put to the vote. Go to this page for the detail.

Join UCU: Though you may not now participate in the current ballot, join now and be protected if you wish to participate in any forthcoming industrial action, and gain the benefit of advice and support that comes with membership. The quickest, easiest and safest way of joining is online via the UCU website http://joinonline.ucu.org.uk/

This page contains some detail about the current pensions situation. Further details and links will be added over the coming weeks and months.

The following chart maps the value of your USS pension fund (the total amount of money and value of investments it holds) against its liabilities (the total amount it has to pay out in pensions etc.) each year since 2004. The value of the pension fund is in blue. The liabilities are in green. Statistics taken from the USS’s own accounts and reports available on the USS website. Can anyone see a deficit?

Total value of the USS fund: blue line
Total cost of liabilities: green line
The figures on the left are millions of pounds. 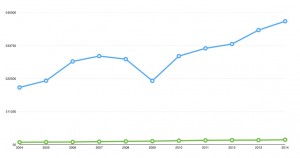 USS are obliged to provide a triennial valuation of the pension fund. This is due at the end of 2014, and it is expected to indicate the fund is in significant deficit. UCU challenge the methods used to define this notional deficit. The deficit is being used to justify some significant changes to the scheme that will impact on all members.

Is the fund in deficit?

According to the paper exercise that USS use to define the value of the scheme, yes, but this is notional. It takes the value of the fund at 31 March 2014, and asks if this sum is enough to pay all future pensions (that is to say, if there were to be no more contributions from staff or employers). The calculation used to construct the financial plan for this impossible scenario is then a matter for debate. USS use the value of gilts to quantify future liabilities, for example. Quantitive easing and the deflated value of gilts has not helped, as the gilt yield is used in the final calculation projected over future years, even though a.) the fund is invested less than 20% in gilts and b.) that yield can only improve. The most recent accounts from USS, however, indicates that assets are far greater than liabilities (liabilities are less than half of one percent of the total value of the fund): the scheme is in surplus.

In 2011, the scheme was already partially downgraded. This, it was argued, was to protect the scheme from further deficit. It was split from a ‘final salary’ scheme (which provides a retirement income based on your salary at retirement) to a compromised final salary scheme for existing members, and a ‘career average’ scheme for new entrants (which provides a retirement income partly based on your average salary over your career). Both are ‘defined benefits’ schemes. UCU was in dispute about this, but ultimately was unable to stop it being imposed, and unable to improve the provision to ‘career average’ members. UCU argued that if a two tier system was established, before long the employers would return to impose a career average scheme on all employees.

The University of Leeds has a page on this issue here: http://www.leeds.ac.uk/forstaff/homepage/67/pensions
This contains the following links:
USS FAQs: http://www.uss.co.uk/news/Pages/ValuationFAQs.aspx
Employers’ Pension Forum FAQs: http://www.employerspensionsforum.co.uk/en/EPF-News/news.cfm/20may14

We provide these links in the interest of balance and the greatest access for members to information. Please note that, before we even begin to talk of or acknowledge ‘deficit’, there are three very reasonable questions to ask:

We address these questions in our leaflet for UCU members of Senate: