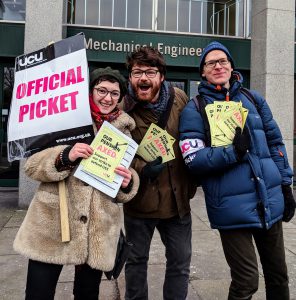 This page will present information and links concerning the dispute over the future of USS (Universities Superannuation Scheme) pensions. The latest updates from the local branch committee on the USS pensions dispute are available below, in chronological order with the most recent first.  We have provided an ‘ABC of USS’ here to offer a plain English account of the jargon that you will hear and read in relation to USS.

Winter 2021/22: Multiple UCU branches, including our own, got a mandate to take strike action and acton short of a strike over the threat of imposition (and eventually the imposition) of the UUK cuts to our USS pensions. In January, the UCU offered a set of proposals to address the 2020 valuation of USS, and the USS themselves deemed these to be ‘viable and implementable’. The UUK, however, misled its membership about the nature of the UCU proposals, and mobilised to recommend its members approve its own proposals, even though these would demonstrably cause cuts of 35% or more to guaranteed income in retirement for the average member. These UUK cuts were eventually approved at a JNC meeting early in 2022, but only on the casting vote of the independent chair. The University of Leeds management, for the first time in the last decade, have refused to consult with your local representatives on this matter. Meanwhile, the USS trustees indicated in a series of interim valuations that the assets of the pension fund were now tending at around £90 billion, which would represent a surplus, and not a deficit, if the same metrics that were used to measure the 2020 valuation were used.

Summer 2021: As we move toward the implementation of increases to our pension contributions in October 2021, the possibility of industrial action looms. On 3 August, Oxford and Cambridge Universities and their associated UCU branches jointly put out a call for serious consideration of Conditional Indexation as a solution to the current dispute. UCU are also considering legal action and a letter in advance of litigation was sent to USS early in August.

April/May 2021: UUK undertook a consultation of its members concerning their response to the implications in the most recent valuation that contributions should increase. Members were surveyed over two solutions a.) benefit reform that will imply a 21% reduction in pensions, a shrinking of the DB part of the scheme, and a inflation cap on the value of your pension growing in value before retirement. b.) an alternative scheme for low paid staff that will be defined contribution only. You can read more details in this briefing. This consultation closed at 5pm on 7 May. At Leeds, the UCU held a parallel survey, the results of which indicated a broad intentes in conditional indexation, and a desire also to fight to retain pensions at current levels or contribution and benefit.

May 2021: UUK consulted their members on whether they would support changes to USS’s governance structures. UCU have supported the proposals made by the JEP for governance change.

In September 2020, the USS began consulting with employers on the ‘technical provisions’ (the theoretical size of the pension promises accrued). UCU expressed we had no confidence in the ‘needlessly cautious’ approach taken by the Universities Superannuation Scheme (USS) in its valuation of the pension scheme.

We called off our strike in 2018 on the promise of a Joint Expert Panel (JEP) being established to look at how the pension scheme operated. The JEP made seven recommendations, and both the employers and the UCU accepted these recommendations. Once implemented, these would imply a total contribution rate of 26% for both employers and employees, allowing members’ contributions to return to the 8% rate. The USS refused to implement these recommendations, and has offered no clear explanation why they will not. When USS tried to imply that the Pensions Regulator used a specific manner of measuring the strength of the Universities’ covenant (their ability to pay long-term), the Regulator publicly refuted this claim.

The current UCU position is still one of no detriment – our contributions rates should not rise, and our benefits in retirement should not go down. We argue that if further contributions have to be made, then the employers should foot the bill.

The UCU’s Supperannuation Working Group (SWG) is exploring a solution to impasse that might be offered in Conditional Indexation of benefits. Details will be posted if this becomes firm UCU policy. CI is described in brief on our ABC of USS page.

As pensions are negotiated nationally, most pensions updates will be from the union nationally.

The following offers were negotiated between UCU and University of Leeds senior management. UCU members voted to end the marking and assessment boycott and accept these offers. This local action is in support of the ongoing national dispute. Joint Statement … END_OF_DOCUMENT_TOKEN_TO_BE_REPLACED

The following email was sent to all USS members at the University of Leeds (as many as could be identified) in the week of 21 March 2022 Dear colleagues, As you know, our Vice-Chancellor has arranged a new series of … END_OF_DOCUMENT_TOKEN_TO_BE_REPLACED

Post from email sent to branch members by pensions rep Mark Taylor-Batty on 25 February 2022 On 23 February, the University of Leeds posted its position on the ‘UCU proposal (sic.) to conclude the USS 2020 valuation’ on the internal ‘For … END_OF_DOCUMENT_TOKEN_TO_BE_REPLACED

Full transcript Vice Chancellor Simone Buitendijk: We’re going into 10 days of strike action and yeah I must say I’m a bit sad about it. Leeds UCU: Of course, nobody is happy to have to participate in industrial action. Colleagues … END_OF_DOCUMENT_TOKEN_TO_BE_REPLACED

You might be concerned to learn that the university has refused to consult meaningfully with the local UCU branch on the matter of USS pensions. They have told us that they are content to back the UUK position and the … END_OF_DOCUMENT_TOKEN_TO_BE_REPLACED

This motion was agreed by the branch at an extra-ordinary general meeting 14 January 2022 This branch notes that: Our branch has a strong mandate for industrial action relating to the USS dispute and the ‘Four Fights’ we had an … END_OF_DOCUMENT_TOKEN_TO_BE_REPLACED

You have until 17 January to complete your personal USS consultation responses, and we strongly recommend that you do: The University of Leeds has the fifth largest population of USS members within the current dispute, and a volume of responses … END_OF_DOCUMENT_TOKEN_TO_BE_REPLACED

There are serious questions to ask about whether university senior management has misrepresented the planned cuts to our pensions. This post was an email sent to members on 16 November 2021 on behalf of the committee by the committee’s lead … END_OF_DOCUMENT_TOKEN_TO_BE_REPLACED