Adapted (to make it readable as prose) from a Twitter-thread – please note that original thread is subject to further updates and that Vicky is responding to questions sent in response to it, which you can follow [here]. You can also follow the thread on [Thread Reader]: Thread by @zenscara #ReviseandResubmit #ASOSforUSS #unityisstrength #USSstrike

The official update from @UCU on the HEC decision to take the UUK proposal on #USS to a ballot is [here] and I’ve been threading my take on today as an HEC member [here]: I’m still tweeting on this thread + began before the official UCU post came out.

HEC: 10 mins to read paper containing recommendations given to us after Branch Delegates Meeting + 1 hour discussion. 6 Motions submitted by members of HEC, including mine on #ReviseandResubmit. Paper passed + Chair judged 5 motions to fall+1 (setting valuation end date) remitted. I do not think the paper that was put forward (which recommended a consultation with members) needed to be incompatible with all 5 motions that fell, especially the one I argued for on #ReviseandResubmit because I believe there was time to include Revise + Resubmit in the process. The Chair disagreed.

Here’s the #ReviseandResubmit motion I proposed to HEC. I moved it arguing it seemed clear from observing the Branch Delegates Meeting, that a *huge* number of members were asking for some form of Revise + Resubmit, and that not to discuss it would have been a dereliction of our duty to represent members. 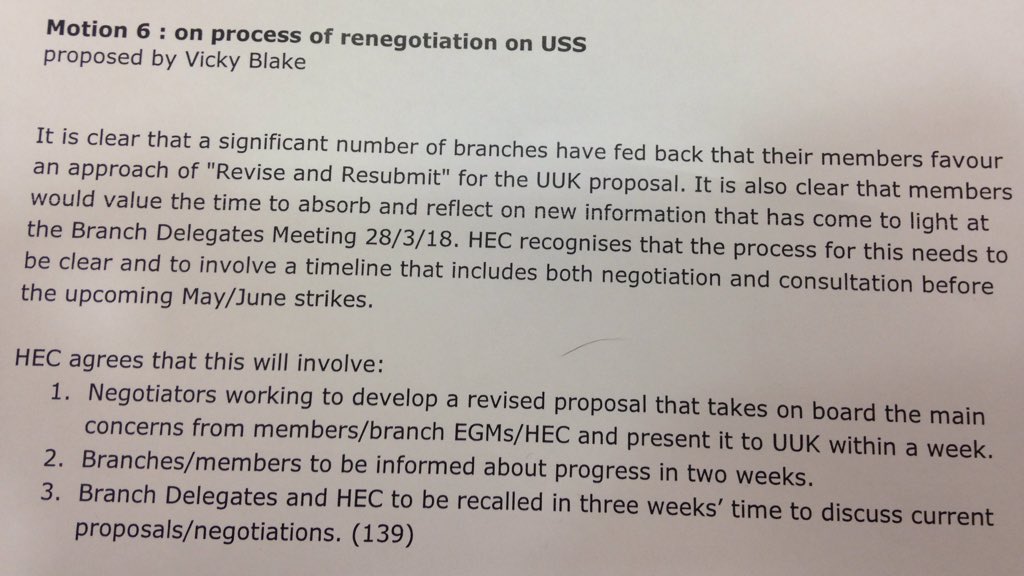 In HEC we were given recap of extra info that had been presented to the Branch Delegates Meeting (which was about 3.5 hrs long I think, as it extended slightly) this morning, including a letter from UUK’s Alistair Jarvis received by the union this morning 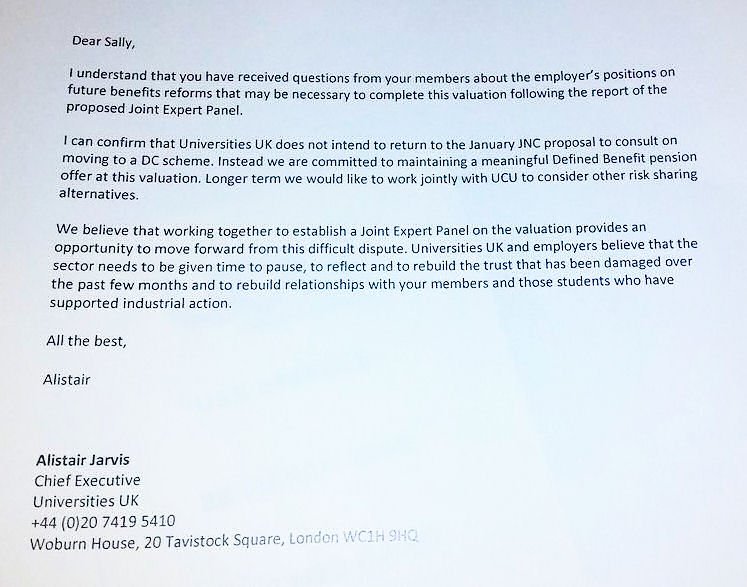 Text: ‘Dear Sally, I understand that you have received questions from your members about the employer’s positions on future benefits reforms that may be necessary to complete this valuation following the report of the proposed joint expert panel. I can confirm that Universities UK does not intend to return to the January joint negotiating committee (JNC) proposal to consult on moving to a defined contributions (DC) scheme. Instead we are committed to maintaining a meaningful defined benefit pension offer at this valuation. Longer term we would like to work jointly with UCU to consider other risk sharing alternatives. We believe that working together to establish a joint expert panel on the valuation provides an opportunity to move forward from this difficult dispute. Universities UK and employers believe that the sector needs to be given time to pause, to reflect and to rebuild the trust that has been damaged over the past few months and to rebuild relationships with your members and those students who have supported industrial action. All the best, Alistair Alistair Jarvis Chief Executive Universities UK

There was also an update on *indications* from the pensions regulator seeing an “opportunity to bring all stakeholders together to avoid recurring disagreements” – the letter was confidential + not in the General Secretary’s “gift” to share but it was referred to as broadly supportive. The Branch Delegates Meeting was also told (via Jarvis’ letter) that we should consider the idea of UUK bringing the 23 Jan JNC decision back (ie to introduce fully DC scheme) “dead” – this was considered a major concession from employers. There were LOTS of questions from branch delegates about how far UUK et al could be trusted + discussion of how “vigilance” & momentum could be ensured. Lots of praise for members’ strike + ASOS action + how far it has brought us. Branch delegates had a lot of questions, especially on process.
(I have been SO uplifted & heartened by the member-led, grassroots democracy at work in growing & mobilising our union throughout this dispute + have become increasingly concerned that we have struggled to make usual processes clear + therefore harder to explain “unusual” ones!)
It’s very significant that the industrial action remains ON during the balloting process on the proposal. So don’t stop your #ASOSforUSS + note strike dates. Many feared action might be suspended during ballot – I’m glad that we’re keeping up pressure on employers during ballot.
Things I don’t know:
*Wording of ballot question
*Whether there will be recommendation on how to vote inserted (HEC did not discuss or vote on this) *How differently (or not) any members might’ve voted at @leedsucu EGM / fed back by email had they had today’s info (or more time)
*Whether I should’ve voted differently today (abstained but felt utterly hideous, under pressure+note it wouldn’t have swayed vote-will explain in another tweet shortly)
*If I’ll ever get out of UCU HQ (am still tweeting b/c can’t face doing on train)
Things I do know:
*This, and the previous Branch Delegate Meeting and HEC Combo (13 March) tell us members *need* more information on processes in plain English so everyone can understand (& can orientate understanding when the union is responding to weird situations) See also [this earlier thread] which explains what happened on 13 March.
*We need to keep doing amazing branch democracy + supporting all members to engage + be heard + ask question  and then some. Everyone will have even more questions about the proposal + context + (what happened) today.
*We need to focus on ways to build consensus alongside space for collegial debate
“How will I vote in the ballot consultation?”
Currently, don’t know. I want to scrutinise every scrap of information (noting the General Secretary has promised more after Easter) + urgently organise meeting for all @leedsucu members to discuss *in depth*. (Mis)Trust in UUK et al is a *huge issue*. That we’ll (probably) be asked a variant of a Yes/No question, where many branches saw not 2 but 3 possible broad routes worries me, and is why I proposed a #ReviseandResubmit (with timely timescale) motion to HEC. I sought to avoid division and to build consensus where possible as #unityisstrength
This is also why I found voting so difficult. I could *not* vote for the 1st paper with recommendations as framed at HEC because it had been judged that it would cause all motions to fall (including #ReviseandResubmit also specific amendment ideas, motions on process, timing + transparency)
My personal perspective: We ended up at vote in a rush, because time was *so* tight. We started late and ironically HEC time was squeezed because we needed more room for debate at the Branch Delegate Meeting, which was fair, but we lost time for HEC to debate/discuss as thoroughly as I think we should’ve.
But I also felt enormously conflicted about voting *against* the paper because it summarised a great deal of progress in this dispute that – above all else, we must not forget to *celebrate* because our incredible #USSstrike + #ASOSforUSS has moved the allegedly immovable a LOT,  and I knew among #ReviseandResubmit folks we have a spectrum of what people would find acceptable and how they’d like it framed.
As several Branch Delegates pointed out earlier, we didn’t know what members thought about new info that came today ( and they didn’t know when voting in EGMs/polls). I absolutely *hate* abstaining; I’m not 100% sure it was the right decision, but didn’t feel I could objectively justify voting for/against paper *as presented* in any good conscience in moment (which came upon us *very* fast). The paper was not a simple Yes/No. I will find out if we can share it because I think it will help members to understand this timeline + today’s outcomes better if we can. And I think that’s really important.
[Added 29 March:]
After sleep + some discussion with @leedsucu committee we decided the absence of the word “confidential” + fact no one said it was confidential means the paper we (HEC) were asked to vote on 1st + motions that it was decided fell as result would be useful to share with members who want to see framing. (So if I get in trouble for this please be aware I gave it thought + consulted amazing @leedsucu committee who agree this is a useful thing to see) – several pages (excuse my awful handwritten scribbles + sorry some are sideways):
[Link to tweet with images]
6 Motions also tabled at HEC – all ‘fell’ except 5 (remitted). Genuinely do not understand why was felt that all these motions necessarily fell as a result of voting on paper moved first. I believed there was room for #ReviseandResubmit if done swiftly+organised way.
[Link to tweet with images]
Report from Lesley McGorrigan (originally sent to UCU Action Group)

Here’s my rough and ready report after attending today’s UCU delegate meeting (as observer) and Higher Education Committee (HEC) meeting in London. The day was extremely frustrating, to say the very least,  given the context of such an important issue, the historically successful strike action, engagement and growth of our union.

Sally Hunt presented the letter from Alistair Jarvis, Chief Exec of UUK and she spoke of the confidential letter she had seen from the pension regulator to David Eastwood, Chair of the USS Board (which she has subsequently emailed you about).  After these updates from Sally,  many delegates said the consultation they had undertaken in their branches may have been different if it had taken place today. Voting cards had been prepared and issued to the delegates but no vote was taken. There is now some contesting of the official report of the delegates/branches’ collective views.  I can confirm that delegates reports were often  muddled and sometimes contradictory due to their methods of consultation – many had conducted email polls (with no debate) offering a binary choice resulting in members voting one way but qualifying their vote with written comments which made their vote ambiguous.  Many branches had not conducted the democratic type of discussion-fuelled voting that we had yesterday at our EGM.  It was very difficult to detect how each branch in the room would have voted had they been asked to.

At the HEC meeting following the delegate meeting, one of the paid union officials presented a paper containing a recommendation that HEC votes to put the UUK proposal (with some clarifications) to a member vote.  The chair of HEC, Douglas Chalmers, ruled that five of the six motions submitted by HEC members would fall if the paper from the paid official was adopted and that his paper would be voted on first.  The paper was passed by 10 votes to 8. I, along with all UCU Left supporters, voted against the paper as we had heard many views from members calling for UCU to revise and resubmit the proposal, accounting for members’ concerns over some of the detail.

Our fantastic members’ action achieved  the latest proposal from UUK, and consigned the 100 percent Defined Contribution scheme to the bin. This is a substantial climbdown from the employers but many members quite rightly don’t trust the USS Board/ UUK to act honourably, without some essential details written into a proposal.

I think we should vote to reject the UUK proposal in its current form and that UCU can then continue its good work and secure the assurances members have asked for.

UCU members are powerful – we have demonstrated this so well.

A UCU Left report that I contributed to is here: http://uculeft.org/2018/03/now-vote-no-and-continue-the-fight/