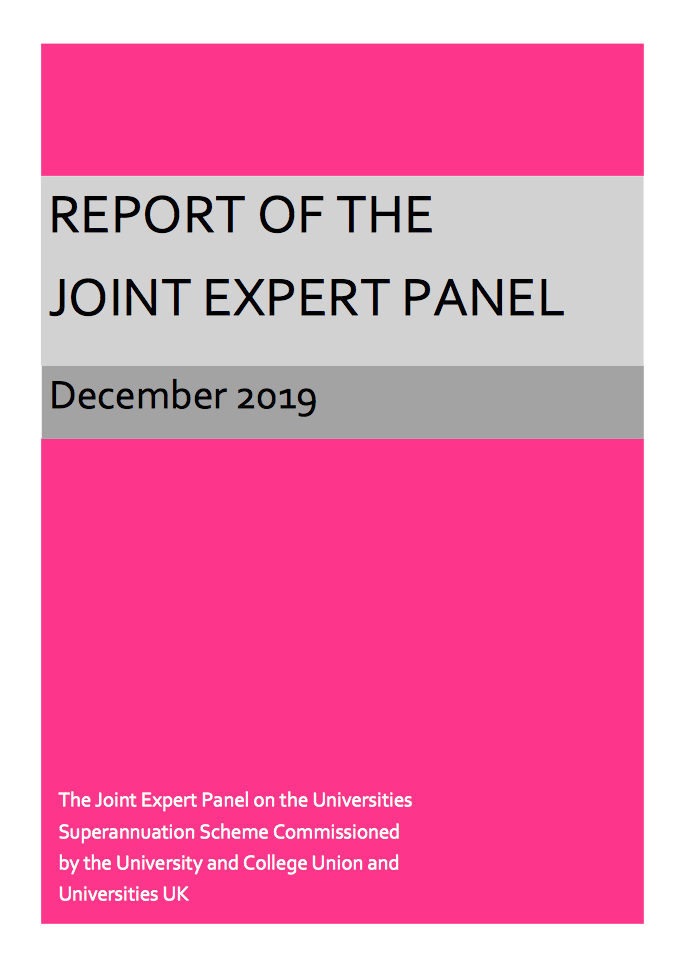 The second report of the JEP arrived last Friday, and it’s a crucial document within the context of the current dispute over the USS pension scheme. Again, it vindicates the positions that UCU has adopted in relation to both the governance of the scheme and the valuation methodology. You can read the document here, and it contains a useful executive summary (pp. 7-12) and a summary of their conclusions (pp. 120-1).

The JEP was established last year as part of an agreement between Universities UK (UUK) and UCU to pause the dispute after a historic fourteen days of strikes across the country. Its first report of September last year addressed the 2017 valuation that was central to the onset of the industrial action. It offered a series of recommendations for adjustments to that valuation. The panel now state that ‘the failure to collectively go forward with these recommendations was […] a missed opportunity to resolve the dispute’.

This second report focusses on the scheme governance and key principles that should inform future valuations. The panel urge both UCU, UUK and USS to work together swiftly to embed these recommendations into the 2020 valuation process, which begins in a matter of weeks.

On the matter of scheme governance, the JEP criticise the manner in which the valuation, and the application of ‘Test 1’, has been the tail to wag the dog of the pension scheme, rather than the valuation being used as a tool to measure the health of the scheme and inform future directions. The report highlights that the trustee is distant from stakeholders and should be more visible through routine engagement. It recommends a list of adjustments to governance processes and structures with the ambition of greater stakeholder (UUK and UCU) input and greater dialogue between USS and those stakeholders.

On the matter of the valuation, the JEP continue to discredit ‘Test 1’ which has dictated a ‘de-risking’* of the scheme’s portfolio, and instead propose a ‘dual-discount’ approach that involves separating the discounting** process for past and future service. This provides for a fair and sustainable approach to valuing the scheme. Importantly, their recommendation would make for a valuation process that is transparent and easier to comprehend.

We hope that UUK will recognise the value of these recommendations to the scheme, and will work with UCU to see that USS accepts and implements these proposals as a means of ensuring the long-term sustainability USS, and of bringing this dispute to a close

*’de-risking’ involves removing a proportion of the higher-risk, and higher-yielding investment vehicles (stocks etc.) from a portfolio and increasing instead the number of low-risk but low-yielding vehicles, such as bonds and gilts. This contributes to the need for higher contributions as the projected value of the scheme decreases.

**the discount rate is one of the important assumptions that contribute to any valuation. It is a means of calculating the current value of the scheme’s assets against its present and future liabilities; what it will have to pay out over time. The ‘discounting’ is the reduction of what is needed now to pay a future cost. This discounting can be done against, for example, of the ‘covenant’, the ability of employers to pay, and against assumptions of the growth of the scheme’s assets (assuming 5% growth of your assets earmarked to pay a debt of £100 you have to pay next year, you need only have just over £95 today – a ‘discount rate’ of 5%)