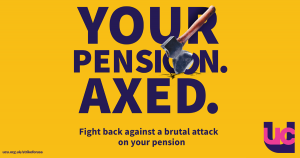 Email sent by branch president Vicky Blake to all members

14 strike dates in the USS dispute have been confirmed and employers notified here and at 60 other universities (a further 7 are to be re-balloted). Unless talks resume and progress is made in the defence of our pensions, we are going on strike in the most significant industrial dispute UCU has seen in Higher Education during its existence.

This is very serious. We ask every UCU member to walk out together on these strike dates. It is with good cause that we have decided, collectively, to take this action. You may remember that during the previous negotiations and disputes over USS we warned that we might end up here. Now is the time to fight.

Strikes begin from 22 Feb in an escalating pattern:

We hope that the employers (represented by Universities UK, or UUK) will see sense and agree to come back to the negotiating table. We have written to our Vice Chancellor urging him to press UUK to give meaningful consideration to alternative proposals for USS instead of pursuing the current course, and we do hope to receive a reply.

We suggest that all members write to the VC, to ask that he takes action to stand with the many staff at the University of Leeds who are members of the USS scheme. More info on the USS dispute to date is here. Email addresses: vice-chancellor@leeds.ac.uk or a.langlands@leeds.ac.uk (we suggest you copy in ucu@leeds.ac.uk)

Importantly, we also ask each and every member to commit to striking on the nominated dates, and to do what you can to help us build as branch for them. Many of you know the drill, especially after your fabulous turnout in the (still ongoing) Statutes dispute – a wealth of useful strike information can be found in the standard UCU Strike FAQ. If you have a question you don’t see covered in it – please email us asap on ucu@leeds.ac.uk and we will find the answers and get them added to the USS specific FAQ that HQ are working on right now.

There will be lots of ways to get involved in planning! Please email ucu@leeds.ac.uk if you can spare any time or skills at all – everything makes a difference, from poster sticking to placard painting to Teach Out teaching to explaining to students and colleagues to inviting people to meetings, and more!

Any questions? Please read the rest of this email, and make sure you attend the EGM on Thursday if you possibly can. Do email us on ucu@leeds.ac.uk (with questions, to sign up for strike planning, etc) but please bear with us if there is a sometimes a delay in our responses – as you may imagine the volume of email has increased!

USS Pensions, including but not limited to:

We also have a number of useful meetings coming up, including two open meetings that we ask you to invite your colleagues to attend (“What About USS?” on 5 Feb and the Open Postgrad Meeting on 12 Feb) – as a reminder:

Guest speaker Sam Marsh, author of  10 reasons why USS is a scandal waiting to bite back (Mathematician, Sheffield UCU)

Open Meeting for all postgrads (members and non-members) covering:

We understand that many members would like to plan for the financial impact of the strikes, and that concerns around the financial impact are heightened for particular groups of members, especially those on insecure, casualised contracts, and part time staff. This issue was raised (by myself and others) at the recent Emergency Higher Education Committee on 22 January – this meeting reaffirmed the existing UCU commitment to prioritise members who would be disproportionately affected by strike action when it comes to fighting fund applications (many of you will be familiar with the portal from the Statutes strikes). UCU’s National Officers are meeting tomorrow to agree formal guidance that will be with us by the end of this week – we will provide this to you as soon as we have it.

Why are we here?

This is a good question, particularly when one considers that UCU’s analysis shows closure of the defined benefit (DB) scheme under the UUK proposals is unnecessary, and are instead the result of a faulty valuation method that in turn calls for an expensive change to how the pension fund is invested. That change would involve moving from growth assets to gilts (gilts have a much lower expected return – which we warned about here) in order to try to reduce risk to employers (known as ‘de-risking’). ‘De-risking’ is really a misnomer, and should perhaps be called ‘risk-flipping’, as what it really entails is a shift of risk away from employers and onto staff: because USS would no longer involve guaranteed pension income and instead be at the mercy of the stock market. See here for Mark Taylor-Batty’s helpful de-risking analogy. It’s also useful to note that in their recent annual report (2017) USS themselves reported that “over the last five years the scheme assets have returned 12.0% per year, and outperforming gilts liability proxy by 2% per year” (p.44) – so why shift to gilts?!

To accept the flipping risk-flipping ‘de-risking’ of our pensions would be the highest risk course of (in)action we could take, because it will devalue our pensions in a manner tantamount to robbery from our old age. Defined Benefit pension schemes should be understood as a key part of our remuneration package – a joint investment between an employee and and the better kind of employer – the sort which recognises the benefit of long term investment in wellbeing for the retention and development of staff who are rewarded for their hard work and service in the sector. As we look around our sector with its long history of real-terms pay deflation, increasing insecurity and casualisation, the loss of yet more pay from our older years is another punch to the stomach, and it is also – to use the terminology of the day – ‘bad for business’. Read a letter from 100 Professors to the Times Higher, on how damaging this could be for higher education here.

Independent analysis by First Actuarial shows that this risk-flipping ‘overhaul’ could rob staff of over £200k in retirement – to put this in relatable terms, that means a typical lecturer would be £10k worse-off per year in retirement. If (like me and many others) you only joined the scheme relatively recently, you’re set to be worse off than many who were at least able to join under the previous final salary version of the scheme. For those joining USS in the future (including many of you who are working now as postgrads and other hourly paid / casualised staff who don’t yet meet the pension threshold or are still struggling on worker contracts) the picture is even bleaker. The proposals the employers’ body wants to see imposed will:

When you think about the USS situation, please do remember that many Vice Chancellors will be unaffected by these changes, because (in addition to huge salaries beyond most of our wildest dreams) a considerable number of them have have already left the USS scheme and arranged to receive the equivalent of their pension contributions as cash. Some Vice Chancellors have broken ranks by calling on the employers’ negotiating body to think again, pressing them to keep a defined benefit scheme. We hope more university senior management teams (including ours at Leeds) will follow suit so we can return to the negotiating table and find a way forward that recognises the scaremongering about USS for what it is: a needless attack on our future wellbeing and ability to retire.

We have heard all about alleged ‘deficits’ in the pension scheme funding, and you may remember we have questioned the basis of the alleged deficit before. The deficit claims are both intriguing and egregious: in their own words, USS themselves recently wrote to pensioners and deferred members of the scheme, saying:

“Firstly, please be assured that USS does not have a £17.5 billion funding deficit. […] The trustee’s ‘best estimate’ view of the future (that is, a 50% probability that our investment forecasts are met or exceeded) is that the scheme actually has a significant surplus,”

If this feels like deja-vu, it’s because in both 2014 and 2017, USS’s own best estimate of the health of the scheme showed that it was in surplus. However, we have already seen two swipes from the value of our pensions in the past 7 years, with the loss of the final salary scheme to new entrants; the closure of final salary past a certain point for those who squeaked into it; and now we face the loss of a defined benefit (‘DB’) pension altogether, in favour of the more volatile defined contribution (DC) scheme that UUK now propose. This is despite the fact that the 2017 USS pension investments grew by 20% in just one year to over £60bn (that number exceeds the GDP of many small countries). USS is not getting worse – we need to remember and understand that when we hear talk of a ‘growing deficit’ and/or an ‘increase in deficit payments’from senior managers and UUK representatives. Such claims are based on misunderstandings and misconceptions. We are told there is a deficit because the pensions regulator requires a particular form of calculation, which are based on assumptions about future growth based on low-yield investments, not the actual investments that are high-yield.

It’s quite handy to remember that the university sector has key differences to the types of industries where a whole chain of outlets or factory plants could go bust, fold, and fail at once (if this happened, I suspect we’d be worrying about more immediate apocalyptic events).

No one takes the threat of strike lightly, least of all UCU. If we are to defend our futures, and that of decent higher education, we must take action, together.

In Solidarity – both now and for our futures,

Vicky and the Committee