Do you think your management should be able to sack you for any reason they like?

Statutes are part of the terms and conditions of academic and academic related staff. The University wants to add a provision to dismiss people for “some other substantial reason” which they say could include:
• third party pressure
• breakdown of trust
• conflict of interest
This is a threat to academic freedom. 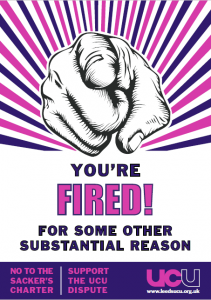 The University’s Statutes set out procedures covering all stages from informal stage, through formal stages, including appeals. These Statutes already contain many grounds for dismissal – redundancy, capability, ill health, conduct – which should cover anything significant. But management want to introduce an additional catch-all dismissal clause – “Some Other Substantial Reason” (SOSR).

UCU has been negotiating over the proposed new Statutes for some time, trying to prevent your terms and conditions from being eroded. But the university has refused to concede on SOSR. They also want to scrap having independent chairs for appeals and independent medical experts for ill health cases.

The Human Resources director circulated an email to staff with examples of when this new SOSR statute might be used: “conflict of interest, breakdown in trust and confidence, mistake or ignorance of law or failure to comply with a legal requirement essential to the post”. Other examples the university has given are: if a member of staff loses their driving licence, issues from a Disclosure and Barring Service check, and third party pressure. Elsewhere, Huddersfield University is trying to use SOSR as grounds for dismissing experienced teaching staff without PhDs.

Allowing third party pressure or workplace disagreement as grounds for dismissal threatens the principled disagreement which is essential to academic freedom and would risk the heart of what a university should be – a community of ideas debated openly without outside interference.

Management say that dismissal for “Some Other Substantial Reason” is legal so they could use it anyway – but the University is legally entitled to pay only statutory sick pay when people are ill, and we wouldn’t expect them to do that. The University of Leeds is supposed to be a good employer (we are University of the Year after all!) and we don’t want to join a ‘race to the bottom’ for worsening staff terms and conditions. Having SOSR in Statutes means it’s likely to be used in all sorts of situations – as the HR email proves. At the moment, we can challenge any dismissal which is not for reasons of conduct, competence or ill health – SOSR would make it MUCH more difficult for us to do that.

Leeds UCU voted for, and is now in, a formal dispute with the university on the changes to Statutes. Please support this dispute. This is an issue of national significance for UCU.

We need your help to get the issues across to staff and to publicise as widely as possible what the university is trying to do.
• Please display and distribute leaflets and posters (download the leaflets here: leaflet and poster)
• Tell colleagues at other universities so the word gets around.
• Help us get good media coverage by sharing any press contacts you have.
We hope to persuade the university to drop the proposed SOSR statute, otherwise we will ballot for industrial action. We could also ask members in other universities to ‘greylist’ Leeds, lobby the University Council, and lobby the government Privy Council who would have to agree the changes (see http://ow.ly/Dh5N309lU4w).

The current Statutes are at www.leeds.ac.uk/secretariat/statutes.html