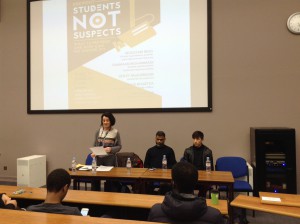 The meeting discussed the ramifications of the ‘War on Terror’ and its use in legitimising and further propelling the pro-war agenda by ‘othering’ and scapegoating Muslims at home and abroad. The meeting heard some of the of victims’ tragic experiences of Islamophobia alongside ramifications of the ‘Prevent’ duty in undermining academic freedom and the relationship of trust between staff and students.

Section 26 of the Counter-Terrorism and Security Act 2015 includes a duty for public bodies including colleges and universities to have ‘due regard to the need to prevent people from being drawn into terrorism’.  In schools, colleges and some Universities this has led to a new culture of stifling debate and democratic expression for one section of our society in particular, Muslims.  For example:

These are just a few examples in which Prevent has taken action and found no threat of terrorism.  All that resulted was that the pupils and students referred felt nervous and frightened about what they can and cannot say or do.  There was consensus at the Leeds meeting on the need for student and staff unions to unite in challenging this McCarthy style legislation.