Leeds UCU are in dispute with university management over proposed changes to Statutes – we are concerned these will make it easier to sack staff and that they pose a serious risk to academic freedom.  Please read this article for details. The dispute is about the proposed addition of ‘some other substantial reason’ (SOSR) for dismissal, plus the removal of independents from appeals panels. These, together with efforts to remove union support in meetings called for by line management (which could be on the path to disciplinary meetings), are key aspects of “clearing the way” for management to terminate employment and reduce the chance of staff success at employment tribunals.

Picketing Parkinson (and the rest!)

Our three days of strike action were inspirational and heartening, especially as we were one of the early branches taking action after the Trade Union Act 2016. There has been a wonderful buzz in the air with positive engagement from students and other staff, plenty of invigorating discussions and ideas for the future.  We’ve seen a surge in new members joining our union over this issue.

Have a look at our strikes Storify for a selection of tweets showing determination, solidarity, involvement and fun!

On Strike Day One we had over 80 members picketing all entrances on our huge campus – we began to run out of places to send the new ones! Strike Day Two was also very solid, with all main entrances covered and approximately 50 pickets. We closed the trilogy of strike days against the sacker’s charter in style, with even more picketers than the previous day. Mid morning, the editor of the Leeds Student newspaper, the Gryphon, delivered a stack of their latest edition, hot off the press to the picketers. The front page splash read ‘Professors Picket Parkinson’, with an excellent article on our strike and an editorial championing the power and importance of the act of striking.

We rounded off picketing on Friday with another mass rally. Dave Muritu (NEC member and UCU national Black Member’s Committee) travelled up from the Midlands to address the crowd. He warned of the dangers of SOSR as his previous employer had used this to sack him – he had been a highly effective branch secretary. The crowd listened intently and, if ever we needed convincing, Dave’s story confirmed that we are right to resist SOSR at Leeds. Hilary Benn (MP for Leeds Central) joined us to offer his support, addressing members at the post-picket rally! We caught some of his speech on video on our Facebook page. 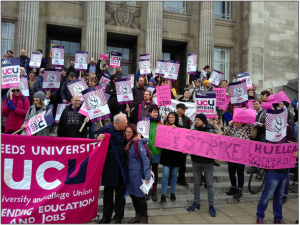 We have the support of several MPs including Alex Sobel (Leeds North West), the Shadow Chancellor John McDonnell, and Hilary Benn (Leeds Central, the University’s constituency MP). Hilary Benn has also written to our Vice Chancellor, signed our petition, and released a statement in support of our campaign.  The Green party voted to support Leeds UCU in our dispute at their national annual conference the weekend preceding the strike.

We’ve had great solidarity from colleagues at other universities, other UCU branches, Leeds alumni and Leeds residents. We’d like to thank everyone who has already sent messages of support – if you haven’t sent one yet please email us ucu@leeds.ac.uk (and sign our petition!).

Signatures have piled onto our petition, aided by significant media interest we have attracted including: TV coverage on the BBC lunchtime and evening news, ITV, Made In Leeds TV, Leeds Student TV; local radio stations Aire and Pulse, Leeds Student Radio ITV; stories and updates in online and print news publications including Guardian, BBC, ITV, Union News, Yorkshire Evening Post, local student newspapers (including the front page story in our student Gryphon paper) and more. Students have been signing and sending postcards to the Vice Chancellor calling on him to drop SOSR and reinstate the protections they propose to remove from Appeals stages of several procedures.

Many new faces appeared on the picket lines – including new members and people who have long been members but never picketed before! Our pickets have once again included a significant cohort of postgraduates on hourly paid contracts who are among our most casualised members. We have had solidarity visits from other UCU branches (including Leeds Beckett, Leeds Art University, Manchester University, Sheffield Hallam, Bradford College; from other unions including Unison and an NEU (former NUT) delegation including their national president; Leeds TUC, and from especially organised delegations from student groups (including the student Socialist Society who independently decided to run stalls and a petition in support of our actions in the past couple of weeks!). We engaged with thousands of students on our picket lines, building on the work we have done leading up to the strike with student union stalls and student media interviews.

Following buoyant and fun post-picket rallies, we ran our ‘Striking Insights’ teach-out every afternoon of the strike. Students and staff engaged together in free education with a wide range of topics on the programme which ranged across philosophy, geography, food science, politics, and far more besides. Members running the sessions felt uplifted and energised by the experience of teaching in a less formal setting and in a participatory way, with more room to explore topics and take on student questions. We ran parallel sessions with attendance ranging from smaller groups of 8-12 to rooms packed with 40 people, depending on the nature of the session. Students have told us how much they love the idea, with many staying after sessions to continue conversations. A student at one session explained they enjoyed it so much because,

“It’s like usually the lecturers are up here and we’re down there, but we’ve just come closer together!”

Students have asked if we plan to continue running events like this after the strike. We’re pleased to confirm that we are actively working to set up a trial of the ‘UCU University of the Aire’ which will offer members new ways to participate in the union, build confidence, and to continue building relationships (and bridges) with our students, many of whom have been so surprised to learn that their lecturers and tutors would ‘teach for free’ during the strike. Watching students walking up and down while reading our strike literature and teach-out information has been great and has further boosted members’ morale and resolve.

If the University management doesn’t move on its ‘sackers charter’, it will face the significant sanction of academic censure and boycott, agreed at our annual Conference. We are also exploring legal routes with union officials and legal advisors, and will be discussing with members the next steps for industrial action.  Our ‘Action Short of a Strike’ continues.

KEEP UP THE SOLIDARITY – What you can do:

This page was last updated on 5 November 2017