UCU members will receive an email from national UCU with a link to a form to fill in to indicate your views on the next steps in the pay dispute. Is 1.1% (plus some talks on gender equality and casualisation) enough or should we continue the industrial action?  This is not formally a vote on whether to accept the employers offer, but the outcome will be used by the union to decide on next steps. Here’s what the Leeds UCU committee recommend: 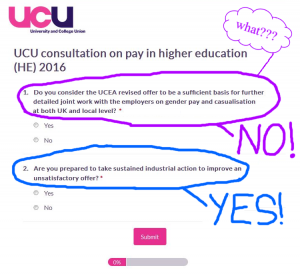 The general feeling of the Leeds UCU committee was one of disappointment that a small majority of the national union’s higher education committee is considering backing down on taking action. We don’t believe that the promised ‘working together’ on the gender pay gap and on reducing casual contracts is strong enough. The national union has been engaged in joint working on issues of gender equality and casual contracts with the employer in the past. This work, while laudable, has generated a series of reports but little real action.

The union’s claim is for a 5% increase to address a 14.5% cut in pay since 2009. When the national average vice-chancellor pay rose by 6.1% last year, why should we accept 1.1%? In offering 1.1%, our employer (UCEA) rejects the Retail Price Index (RPI, currently around 2.0-2.2%) as a statistically unsound measure yet argues for an RPI-based increase in tuition fees.

The recent victories at Coventry University (where staff who were put on FutureWorks agency contracts will now be offered Coventry University Services employment contracts and UCU will once again be recognised for those staff) and at Hull College (where 142 staff were threatened with redundancy but, following negotiation with UCU, the college has confirmed that it no longer plans to make any UCU members compulsorily redundant) show that we can win with a nationwide campaign of solidarity.

If we start a campaign, we need to see it through to the end.

The Leeds UCU committee recommends the following:
1. Do you consider the UCEA revised offer to be a sufficient basis for further detailed joint work……No
2. Are you prepared to take sustained industrial action to improve an unsatisfactory offer? Yes

The second question turns on what type of action would be needed to shift the employers to put more into the pay bill to arrest a real-terms reduction in pay. If the majority of members voting decide to vote YES to the second question, then the union will call an exam marking boycott in the New Year and some focused strike action to build up to that boycott. (NB the national union has confirmed that the action on external examiners and work to contract still applies until further notice).

Above all, the Leeds UCU committee encourages members to use this opportunity to make your views known.